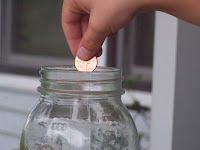 Well, this was taken as a challenge. Our boy suddenly had a rocket attached to his feet. He raced into his room and came skidding back into the dining room sans wallet before Paul could say 2 1/2. He victoriously cocked his hands on his hips and declared, "Now I get to keep all the money in your wallet!"

We've tried different behavior modification strategies over the past two years with him, some successful, some not-so-successful. Here are the highlights:

As parents, my husband and I struggle with the idea of using tangible prizes to reinforce good behavior. Sometimes it's appropriate, but we don't want our kids to feel like they should get something when they behave or do their chores. We don't want to encourage that feeling of entitlement kids can develop when they are blessed with every thing a kid could need, plus some. This blessing can too easily become a curse, for both the child and the parents. 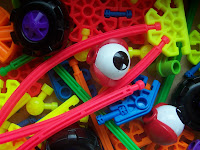 Each time Kid 1 followed directions the first time, he earned a new piece to build with. This was amazing! By the time he earned all the pieces, he was doing his chores, getting himself dressed, brushing his teeth, and presenting himself at the breakfast table in "TA-DAAAA!" pose. He never failed to inform us when he did things without even being asked. Today, he usually still gets himself dressed and ready for his day without any prompting from us, or tangible reward. We sometimes have to remind him to brush his teeth or pick up his dirty laundry, but the morning routine is so much easier now that Kid 1 is in the habit of doing these things by himself. Yea!

As a parent, I know my strategies will have to change as my child changes. What works for me today may not work tomorrow, and it may not work with KID 2. I look at parenting as a great experiment and try to have fun with it!

Do you have any tried-and-true or crash-and-burn stories of parenting?
Posted by Donna at 8:23 AM